The cover image is based on the Research Article A machine learning approach for the design of hyperbranched polymeric dispersing agents based on aliphatic polyesters for radiation-curable inks by Danny E.P. Vanpoucke et al., https://doi.org/10.1002/pi.6378.  (The related paper can be found here.) 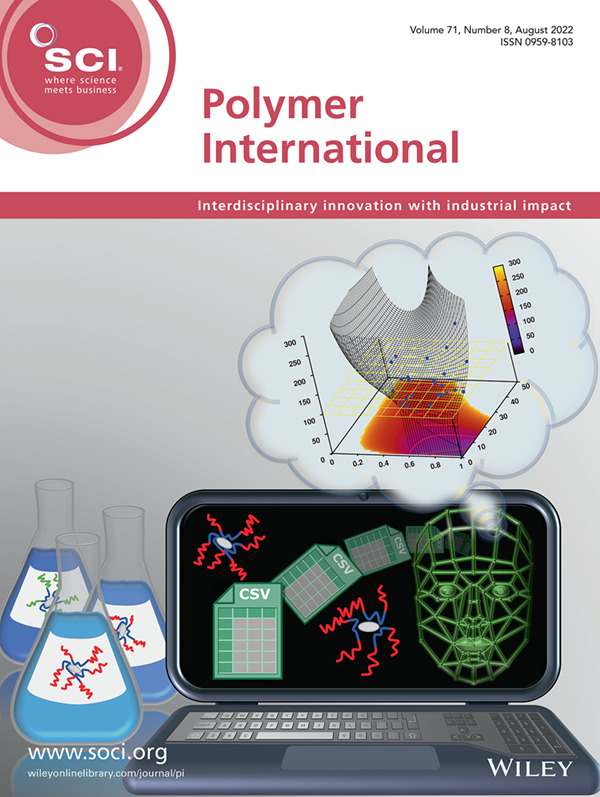 Wordle-mania: an opportunity for python programming and artificial intelligence.

Over that last few months the wordle game has become increasingly popular, with people sharing their daily feats on Twitter. Currently the game is hosted by the NY times which bought it the end of January 2022 from its creator.  The game is rather straightforward: you have 6 guesses to find a 5-letter English word. Every guess, the game tells you if a letter is (1) not in the word [grey], (2) in the word at a different position [yellow/orange], or (3) in the word at the exact same position [green].

This seamlessly brings me to the central topic of this post: writing a program to help win this game as efficiently as possible. Not terribly original, but it’s a means to an end, as this simple project allows us to explore some more advanced topics in programming in python as well as artificial intelligence.

During this exploration I’ll  be including and updating a set of tutorials as well as this post. The python side of the project will focus on efficiency and easy of use and distribution, while the AI side will focus on smart ways predicting the best possible next guess. For the latter, an important caveat is that this means that the program should also work if you’re the last player living on earth, or if you decide to play wordle in a different language or a different number of letters. This means that creating a distribution of the  tweeted results of other players and comparing this with the complete set of brute-forced distributions to guess the wordle of the day in a single guess, would not satisfy my definition of AI. It is an interesting Big-data kaggle competition though.

The WordleAssistant Library and notebooks.

All tutorial code and jupyter notebooks can be found in this github repository.

Happy to announce my TEDxUHasselt talk is officially part of the TEDx universe:  https://www.ted.com/talks/danny_vanpoucke_the_virtual_lab .

I enjoyed talking about the VirtualLab. Showed examples from atoms to galaxies, from computer-chips to drug-design and from to opinion-dynamics to epidemiology. I looked at the past and and glanced towards the future, where machine learning and artificial intelligence are the new kids on the block.

Practical Machine-Learning for the Materials Scientist 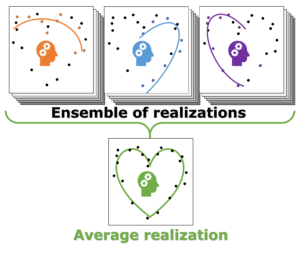 Machine-Learning  is up and trending. You can’t open a paper, magazine or website without someone trying to convince you their new AI-improved app/service will radically change your life. It will make the production of your company more efficient and cheaper, make costumers flock to your shop and possibly cure cancer on the side. Also in science, a lot of impressive claims are being made. General promises entail that it makes the research of interest faster, better, more efficient,… There is, however, a bit of fine print which is never explicitly mentioned: you need a LOT of data. This data is used to teach your Machine-Learning algorithm whatever it is intended to learn.

In some cases, you can get lucky, and this data is already available while in other, you still need to create it yourself. In case of computational materials science this often means performing millions upon millions of calculations to create a data set on which to train the Machine-Learning algorithm.[1] The resulting Machine-Learning model may be a thousand times faster in direct comparison, but only if you ignore the compute-time deficit you start from.

In materials science, this is not only a problem for those performing first principles modeling, but also for experimental researchers. When designing a new material, you generally do not have the resources to generate thousands or millions of samples while varying the parameters involved. Quite often you are happy if you can create even a few dozen samples. So, can this research still benefit from Machine-Learning if only very small data sets are available?

The Good, the Bad and the Average. 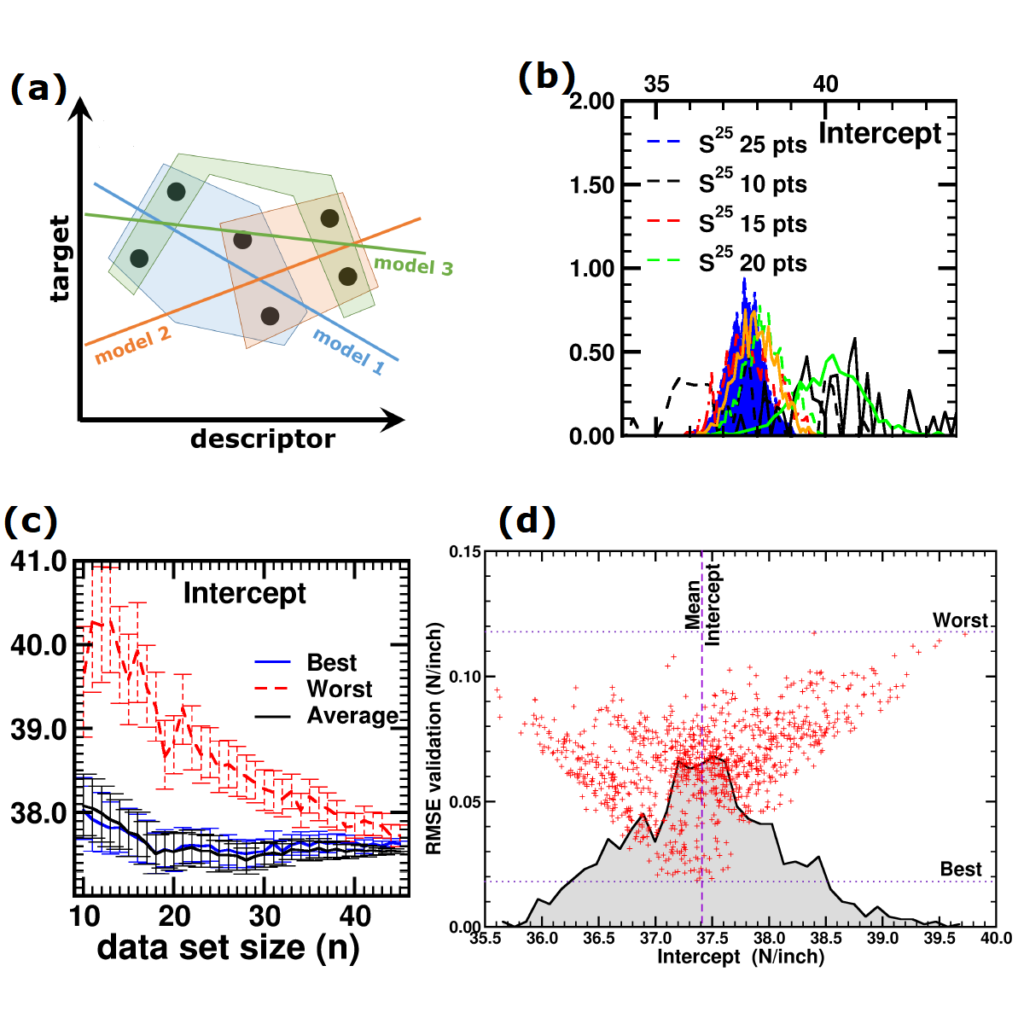 In Machine-Learning a data set is generally split in two parts. One part to train the model, and a second part to test the quality of the model. One of the underlying assumptions to this approach is that each subset of the data set provides an accurate representation of the “true” data/model. As a result, taking a different subset to train your data should give rise to “the same model” (ignoring small numerical fluctuations). Although this is generally true for large (and huge) data sets, for  small data sets this is seldomly the case (cf. figure (a) on the side). There, the individual data points considered will have a significant impact on the final model, and different subsets give rise to very different models. Luckily the coefficients of these models still present a peaked distribution. (cf. figure (b)).

On the down side, however, if one isn’t careful in preprocessing the data set correctly, these distributions will not converge upon increasing the data set size, giving rise to erratic model behaviour.[2]

Not only the model coefficients give rise to a distribution, the same is true for the model quality. Using the same data set, but making a different split between training and test data can give rise to large differences in  quality for the model instances. Interestingly, the model quality presents a strong correlation with the model coefficients, with the best quality model instances being closer to the “true” model instance. This gives rise to a simple approach: just take many train-test splittings, and select the best model. There are quite some problems with such an approach, which are discussed in the manuscript [2]. The most important one being the fact that the quality measure on a very small data set is very volatile itself. Another is the question of how many such splittings should be considered? Should it be an exhaustive search, or are any 10 random splits good enough (obviously not)? These problems are alleviated by the nice observation that “the average” model shows not the average quality or the average model coefficients, but instead it presents the quality of the best model (as well as the best model coefficients). (cf. figure (c) and (d))

This behaviour is caused by the fact that the best model instances have model coefficients which are also the average of the coefficient distributions. This observation hold for simple and complex model classes making it widely applicable. Furthermore, for model classes for which it is possible to define a single average model instance, it gives access to a very efficient predictive model as it only requires to store model coefficients for a single instance, and predictions only require a single evaluation. For models where this is not the case one can still make use of an ensemble average to benefit from the superior model quality, but at a higher computational cost.

[1] For example, take “ANI-1: an extensible neural network potential with DFT accuracy at force field computational cost“, one of the most downloaded papers of the journal of Chemical Science. The data set the authors generated to train their neural network required them to optimize 58.000 molecules using DFT calculations. Furthermore, for these molecules a total of about 17.200.000 single-point energies were calculated (again at the DFT level). I leave it to the reader to estimate the amount of calculation time this requires.

Machine Learning is quickly becoming an important tool in modern materials design. Where many of its successes are rooted in huge data sets, the most common applications in academic and industrial materials design deal with data sets of at best a few tens of data points. Harnessing the power of Machine Learning in this context is therefore of considerable importance. In this work, we investigate the intricacies introduced by these small data sets. We show that individual data points introduce a significant chance factor in both model training and quality measurement. This chance factor can be mitigated by the introduction of an ensemble-averaged model. This model presents the highest accuracy while at the same time it is robust with regard to changing data set size. Furthermore, as only a single model instance needs to be stored and evaluated, it provides a highly efficient model for prediction purposes, ideally suited for the practical materials scientist.