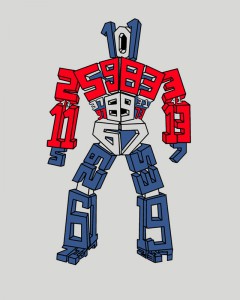 Optimus Prime, the most prime of all autobots.[source]

Recently, my girlfriend got sucked into this madness. Luckily she is not trying to generate the next largest prime (which would need to have more than 22 Million digits, although I might have jinxed it now). Instead she is looking for order into chaos; leading to pen and paper graphs, evolving into excel worksheets being abused as ordinary bitmap pictures and finally mathematica applications for even more heavy lifting.

These last exercises came to a somewhat grinding halt when mathematica refused to generate a gif-animation (it just failed to do the job without providing any warning that something might have gone awry). However, because it could generate the separate frames without any issues, I was tempted to dig up an old fortran module which allowed me to generate gif images and animations. I remembered correctly that it was able to both read and write gif-images, and so, after 10 minutes of writing a small program (9 minutes remembering how things worked) and another 10 linking in all dependencies and fixing some inconsistencies, I had a working program for generating a gif animation from separate gif images.

The initial test went smoothly. Using some simple gif images I created in paint, the resulting 4 frame animation is the one on the left (which is probably giving you a headache as you read this ;-).

The real test, with the single frame gifs Sylvia had prepared, was rather interesting: It failed miserably. Fortunately it also taught us the origin of the problem: mathematica was generating frames of different dimensions. And although this does not give rise to problems in the workbook or generated avi, it does kill an animated gif. After fixing this, also mathematica successfully generated the animated gif Sylvia wanted to see. Also my own small program was now able to perform the intended trick, although it showed that a different color-map was created for each frame by mathematica, something my own implementation did not handle well (we’ll fix that somewhere in the future).

The executable (including prerequisite dll’s) can be downloaded here.

If you do not suffer from epileptic seizures (or not yet), you could check out the results in the spoiler below.