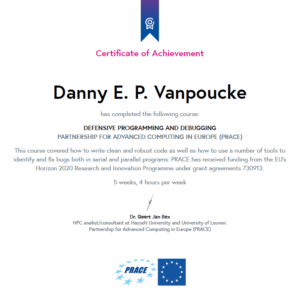 Last few months, I finally was able to remove something which had been lingering on my to-do list for a very long time: studying debugging in Fortran. Although I have been programming in Fortran for over a decade, and getting quite good at it, especially in the more exotic aspects such as OO-programming, I never got around to learning how to use decent debugging tools. The fact that I am using Fortran was the main contributing factor. Unlike other languages, everything you want to do in Fortran beyond number-crunching in procedural code has very little documentation (e.g., easy dll’s for objects), is not natively supported (e.g., find a good IDE for fortran, which also supports modern aspects like OO, there are only very few who attempt), or you are just the first to try it (e.g., fortran programs for android :o, definitely on my to-do list). In a long bygone past I did some debugging in Delphi (for my STM program) as the debugger was nicely integrated in the IDE. However, for Fortran I started programming without an IDE and as such did my initial debugging with well placed write statements. And I am a bit ashamed to say, I’m still doing it this way, because it can be rather efficient for a large code spread over dozens of files with hundreds of procedures.

However, I am trying to repent for my sins. A central point in this penance was enlisting for the online MOOC  “Defensive Programming and Debugging“. Five weeks of intense study followed, in which I was forced to use command line gdb and valgrind. During these five weeks I also sharpened my skills at identifying possible sources of bugs (and found some unintentional bugs in the course…but that is just me). Five weeks of hard study, and taking tests, I successfully finished the course, earning my certificate as defensive programmer and debugger. (In contrast to my sometimes offensive programming and debugging skills before 😉 .)