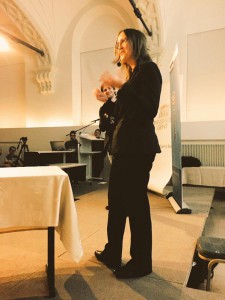 Sylvia convincing the jury at the Famelab heat in Ghent. (Thanks to jury member Philippe Smet)

These days, a scientist is no longer the lone researcher, hiding away in dark rooms and cellars, never coming out, except to ask a servant to mail a letter with his/her newest findings to a like-minded scholar hidden in some other dungeon. Nowadays, we have email to do the latter. In addition, “the scientist” has also had to become the inspiring teacher, the diligent administrator/manager, and the quick salesman/woman pitching his/her ideas for new project-funding. More recently, becoming a rock star was added to this list. (One may start to wonder when she/he should be doing research.)

Since 2005, Famelab, which is part of the Cheltenham Science Festival, has been a platform for young scientist to become such a rock star. In only three minutes, they have to explain a scientific topic of their own choice (and expertise) to the lay public. For this they are allowed only the use of a prop, which they have to be able carry by themselves onto the stage (i.e. no PowerPoint-slides or projected video). Their presentation is then judged by a panel with experience in science communication, focusing on 3 c’s: clarity (the general public should understand what you are going on about), content (it’s not because you present for a general public that you are allowed to cut corners and tell things which aren’t really true) and  charisma (can you inspire people).

This year, my girlfriend decided to enter the Famelab competition (she’s by far the better communicator of the two of us). During the regional Famelab-heat on April 24th, in my hometown Ghent, she explained in three minutes why we see colours in soap-bubbles (video). The competition during the heat was quite impressive, and of the 25 people who started that day, she was one of the eight national finalist who will be competing, coming May 12th in Leuven, for a single spot in the international Famelab final in the UK. On her blog you can find more on the entire Famelab experience: (1),(2),(3) )

She will be presenting a different story than during the regional heat, which I am not yet allowed to disclose. All I can say is that you will look differently at yourself afterward, and we already made a video of the act/presentation in the streets of Ghent.

In her rise to science-rock-stardom, she already has her first groupie signing this post.