Stargazing at the ISS

What happens if two physicists take a holiday? They end up stargazing and hunting for the International Space Station (ISS). During the last week and a half we tried to capture the ISS flybys on camera nearly every night (with varying success). Each night we learned new things: 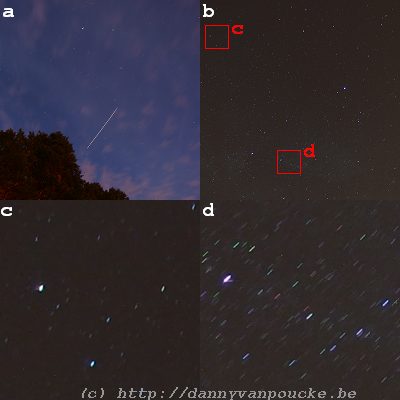 (a) Flyby of the ISS on August 4, 22h38 with a 20 second exposure, and ISO speed of 160. (b) Midnight starscape on august 5th (awaiting the ISS flyby) with a 60 second exposure at ISO-160. (c) and (d) zoomed in sections of (b) showing the color of the stars and arcs due to the earth rotation. (c) shows the a section of sky quite close to the north(small arcs). The arcs shown in (d) are about 15 arc-minute in size. (pictures by Sylvia Wenmackers)