Today our one-week spring school on computational tools for materials science kicked off. During this week, Kurt Lejaeghere and I host this spring school, which we have been busily organizing the last few months, intended to introduce materials scientists into the use of four major ab-initio codes (VASP, ABINIT, Gaussian and CP2K). During this first day, all participants are immersed in the theoretical background of molecular modeling and solid state physics. 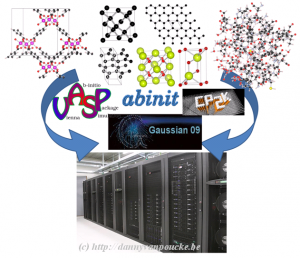 Prof. Karen Hemelsoet presented a general introduction into molecular modeling, showing us which computational techniques are useful to treat problems of varying scales, both in space and time. With the focus going to the modeling of molecules she told us everything there is to know about the potential energy surface, (PES)  how to investigate it using different computational methods. She discussed the differences between localized (i.e. gaussian) and plane wave basis sets and taught us how to accurately sample the PES using both molecular dynamics and normal mode analysis. As a final topic she introduced us to the world of computational spectroscopy, showing how infrared spectra can be simulated, and the limitations of this type of simulations.

With the, somewhat mysterious, presentations of Prof. Stefaan Cottenier we moved from the  realm of molecules to that of solids. In his first session, he introduced density functional theory, a method ideally suited to treat extended systems at the quantum mechanical level. And showed that as much information is present in the electron density of a system as is in its wave function. In his second session, we fully plunged in the world of solids, and we were guided, step by step, towards a full understanding of the technical details generally found in the methods section of (ab-initio) computational materials science work. Throughout this session, NaCl was used as an ever present example, and we learned that our simple high-school picture of bonding in kitchen salt is a lie-to-children. In reality, Cl doesn’t gain an extra electron by stealing it away from Na, instead it is rather the Na 3s electron which is living to far away from the Na nucleus it belongs to.