It is becoming an interesting yearly occurrence: the VSC user day. During this 5th edition, HPC users of the various Flemish universities gather together at the Belgian Royal Academy of Science (KVAB) to present their state-of-the-art work using the Flemish Tier-1 and Tier-2 supercomputers. This is done during a poster-presentation session. This year, I presented my work with regard to vibrational spectra in solids and periodic systems. In contrast to molecules, vibrational spectra in solids are rarely investigated at the quantum mechanical level due to their high cost. I show that imaginary modes are not necessarily a result of structural instabilities, and I present a method for identifying the vibrational spectrum of a defect. 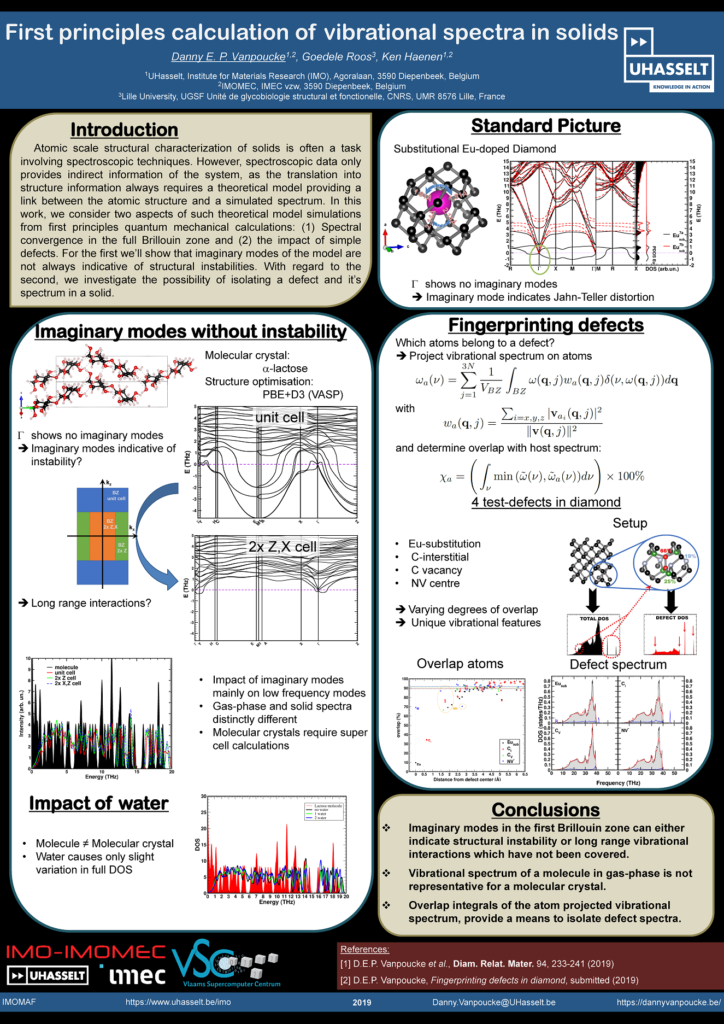 In addition, international speakers discuss recent (r)evolutions in High Performance Computing, and during workshops, the participants are introduced in new topics such as GPU-computing, parallelization, and the VSC Cloud and data platform. The possibilities of GPU were presented by Ehsan, of the VSC, showing extreme speedups of 10x to 100x, strongly depending on the application, the graphics card. It is interesting to see that simple CUDA prama’s can be used to obtain such effects…maybe I should have a go at them for the Hirshfeld and phonon parts of my HIVE code…if they can deal with quadruple precision, and very large arrays. During the presentation of Joost Vandevondele (ETH Zürich) we learned what the future holds with regard to next generation HPC machines. As increasing speed becomes harder and harder to obtain, people are again looking into dedicated hardware systems, a situation akin to the founding days of HPC. Whether this is a situation we should applaud remains to be seen, as it means that we are moving back to codes written for specific machines. This decrease in portability will probably be alleviated by high level scripting languages (such as python), which at the same time result in a significant loss of the initial gain. (Think of the framework approach to modern programming which leads to trivial applications requiring HPC resources to start.)

In addition, this year the HPC-team of the TIER-1 machine is present for a panel discussion, presenting the future of the infrastructure. The machine nearly doubled in size which is great news. Let us hope that in addition for financing hardware, there is also a significant budget considered for a serious extension of a dedicated HPC support team. Running a Tier-1 machine is not something one does as a side-project, but which requires a constant vigilance of a dedicated team to deal with software updates, resulting compatibility issues, conflicting scripts and just hardware and software running haywire because they can.

With this hope, I look toward the future. A future where computational research is steadily are every quickly is becoming common place in the fabric om academic endeavors.