Wednesday May 18th was a good day for our little family. Since my girlfriend an I both are physicists by training, we attended the annual meeting of the Belgian Physical Society in Ghent, together. What made this event even more special was the fact that both of us had an oral presentation at the same conference, which never happened before. 🙂

Sylvia talked about an example of indeterminism in Newtonian mechanics, and showed how the indeterminism can be clarified by using non-standard analysis. The example considers the Norton Dome, a hill with a specifically designed shape (

). When considering a point mass, experiencing only gravitational force, there are two solutions for the equation of motion: (1) the mass is there, and remains there forever (r(t)=0) and (2) the mass was rolling uphill with a non-zero speed which becomes exactly zero at the top, and continues over the top (

with T the time the top is reached). Here, r refers to the arc length as measured along the dome (0 at the top). In addition, there also exists a family of solutions taking the first solution at t<T, while taking the second solution at t>T. (As the first and second derivatives of these latter solutions are continuous, Newton will not complain.) This leads to indeterminism in a Newtonian system; for instance, you start with a mass on the top of the hill, and at a random point in time it starts to roll off without the presence of an external something putting it into motion. Using infinitesimals, Sylvia shows that the probability for the mass to start rolling off the dome immediately is infinitesimally close to one.

My own talk was on the use of computational materials science as a means for understanding and explaining experimental observations. I presented results on the pressure-induced breathing of the MIL-47(V) MOF, showing how the experimentally observed S-shape of the transition-pressure-curve can be explained by the spin interactions of the unpaired vanadium-d electrons: it turns out that regions with only ferromagnetic chains compress already at 85 MPa, while the addition of higher and higher percentages of anti-ferromagnetic chains increases the pressure at which the pores collapse, up to 125 MPa for the regions containing 100% anti-ferromagnetic chains. As a second topic, I showed how the electronic band structure of the linker-functionalized UiO-66(Zr) MOF changes. When one or two -OH or -SH groups are added to the benzene ring of the linker, part of the valence band is split off and moves into the band gap. In semiconductors, this would be called a gap state; however, in this case, since every linker in the material contributes 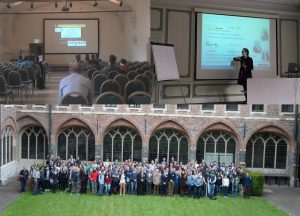 a single electron state to this gap state, it practically becomes the valence band top. As a consequence, the color of such functionalized MOF’s changes from white to yellow and orange. As a third topic, I discussed the COK-69(Ti) MOF. In this MOF the electrons in the titaniumoxide clusters are strongly correlated, just as for pure titaniumoxide. Because such systems are poorly described with standard DFT, we used the DFT+U approach, which allowed us to discern between Ti3+ and Ti4+ ions. The latter was practically done by partitioning the electron density using the Hirshfeld-I scheme.

Next to our own talks, the BPS-meeting started with two very interesting plenary lectures on the two big machines/facilities of the physics community: ITER (fusion reactor under construction) and LHC (circular collider, under constant upgrade) at CERN. Prof. Jean Jacquinot, presented the progress in fusion research (among which simulations of plasma-instabilities) and the actual building progress of the ITER facility. Prof. Sergio Bertolucci on the other hand informed us on the latest results obtained with the LHC at CERN, but also about future plans (Future Circular Collider, with a circumference of about 100 km!!). He also showed us the amount of data involved in running the CERN experiments, puting them into perspective: LHC produced in 2012 about 15 Petabyte of data per year (15.000 Terabyte) which is the same as the mount of data added to Youtube on yearly basis. At that time the ATLAS experiment had a dataset of 140 Petabyte (compare to the 100 Petabyte of google’s search index or the 180 Petabyte of facebook uploads/year). The presenters, both excellent and enthusiastic speakers, reminded us that these projects thrive on the enthusiasm of young researchers with open minds. But they also noted, something that is rather often forgotten, that it is the journey not the goal which is most important. Of course, ITER is the next step on the road to commercial fusion power, but along the way much more is learned as a result of tackling practical problems. This is even more so for the CERN experiments, where the “goal” is not as related to our daily lives (keeping the lights on) but focuses on understanding the world. This is at the core of what it means to be a physicist: the need and drive to understand the world. This is also what should drive research but becomes increasingly hampered by the funding-question: how/what profit will it make in the “real world”. Remember the transistor which makes your computer and smartphone as powerful as they are, the laser in CD/DVD-players, the internet allowing you to read this post, and so many more.

Following these plenary presentations, four young scientists competed for the young speaker award presenting their PhD research. Two presentations (1),(2) focused on vortices in superconductors, a third one discussed the use of plasmons in graphene nanoribbons to enhance telecommunication while the fourth talk introduced us into the world of string theory.

In the afternoon, there were six parallel session, of which I mainly attended the Condensed Matter and Nanostructure Physics-session (since I had my own talk there) and the Biological, Medical, Statistical and Mathematical Physics-session rooting for Sylvia. During the Condensed matter session I was mainly fascinated by the presentation of Prof. Sara Bals, on coloring atoms in 3 dimensions. She showed how, using energy-dispersive X-ray (EDX) mapping it is possible to create a 3D atomic lattice of nano-materials and clusters. This is a more direct approach than the usual X-ray diffraction (XRD) approach for identifying a crystal structure. Unfortunately, I am afraid this technique may not be well suited for the MOFs I’m working on, since they contain mainly light elements and not heavy metals(although it may be interesting to try once the technique is optimized further). It is, however, definitely a technique to remember for future projects, to suggest to experimental collaborators.