Mechanochemical route to the synthesis of nanostructured Aluminium nitride 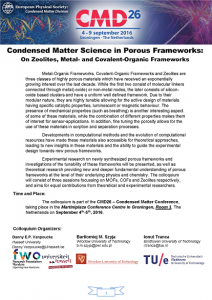 On Monday, we had the second day of our colloquium on Porous Frameworks, containing no less than 4 full sessions, covering all types of frameworks. We started the day with the invited presentation of Prof. Dirk De Vos of the KU Leuven, who discussed the breathing behavior in Zr and Ti containing MOFs, including the work on the COK-69 in which I was involved myself. In the MOFs presented, the breathing behavior was shown to originate from the folding of the linkers, in contrast to breathing due to the hinging motion of the chains in MIL-47/53 MOFs.

After the transition metals, things were stepped up even further by Dr. Stefania Tanase who talked about the use of lanthanide ions in MOFs. These lanthanides give rise to coordinated water molecules which appear to be crucial to their luminescence. Prof. Donglin Jiang, of JAIST in Japan, changed the subject to the realm of COFs, consisting of 2D porous sheets which, through Van Der Waals interactions form 3D structures (similar to graphite). The tunability of these materials would make them well suited for photoconductors and photoenergy conversion (i.e. solar cells).

With Prof. Rochus Schmid of the University of Bochum we delved into the nitty-gritty details of developing Force-Fields for MOFs. He noted that such force-fields can provide good first approximations for structure determination of new MOFs, and if structure related terms are missing in the force-field these will pop up as missing phonon-frequencies.

Prof. Monique Van der Veen showed us how non-polar guest molecules can make a MOF polar, while Agnes Szecsenyi bravely tackled the activity in Iron based MIL-53 MOFs from the DFT point of view. The row of 3 TU Delft contributions was closed by the invited presentation of Prof. Jorge Gascon who provided an overview of the work in his group and discussed how the active sites in MOFs can be improved through cooperative effects.

Prof. Jaroslaw Handzlik provided the last invited contribution, with a comparative theoretical study of Cr-adsorption on various silicate based materials (from amorphous silicate to zeolites). The final session was then closed by the presentations of Dr. Katrine Svane (Bath University) who discussed the effect of defects in UiO-66 MOFs in further detail and Marcus Rose presenting his findings on hyper-crosslinked Polymers, a type of COFs with an amorphous structure and a wide distribution in different pore sizes.

This brought us to a happy end of a successful colloquium, which was celebrated with a drink in the city center of Groningen. Tuesday we traveled back home, such that Wednesday Sylvia could start at the third part of the conference-holiday roller coaster by leaving for Saltzburg.